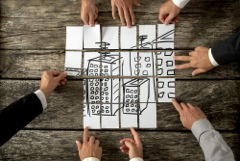 According to statistics from the U.S. Census Bureau, nearly one of every six homes in the city of Detroit faced tax foreclosure in 2015. An effort to stanch the bleed and return control of neighborhoods to its homeowners is being explored through models like Community Land Trusts.

There are several reasons why Detroit faces such high rates of tax foreclosure. Many buildings have been over-assessed, according to economists, and counties are using outdated property values, which result in high tax bills.  Additionally, though the city offers a poverty exemption based on income, many city residents seem unaware or unable to obtain the tax break. As well, with some properties selling for as little as $1,000, the Detroit housing market often attracts investors who purchase homes, milk tenants for rent, then simply walk away from their properties.

While there have been mixed efforts in response to the city’s high foreclosure rate, like community groups buying some houses and deeding them back to the original families, or the city’s effort to reassess property values, the CLT model has become an attractive model for neighborhoods to pursue.

CLTs are nonprofit, community-based organizations designed to ensure community stewardship of land. CLTs can be used for many types of development (including commercial and retail), but are primarily used to ensure long-term housing affordability. The model is becoming increasingly popular across the country in response to speculation in urban real estate. It aims to keep buildings — whether rental housing, owner-occupied homes or businesses — permanently affordable.

With homeownership rates across the country down more than 15 percent from their pre-housing bubble highs, which have forced rents to skyrocket, CLTs have become increasingly popular.  From 2000 to 2011, the number of CLTs grew from 90 to 242, according to a 2011 study published by Vanderbilt University. In 2015, the Right to the City Alliance’s Homes for All Campaign, which works to fight displacement in cities throughout the country, worked with 12 organizations developing CLTs in 10 cities, including Detroit.

In 2015, a coalition of Detroit activists launched Detroit’s first CLT, buying 15 homes spread across the entire city versus in a concentrated area, like many CLT models. “We’re sort of doing it backwards,” Aaron Handelsman of the Detroit People’s Platform, one of the organizers of the CLT said in an interview regarding the CLT launch. Handelsman said, ideally, they would have been working with several families over many years before launching the land trust, “…but it was a situation where either they were going to lose their homes and get evicted, or give permission to Storehouse of Hope [to acquire their homes].”

The return of businesses and capital to Detroit, along with the resulting downtown and midtown building booms, have led to sharp increases in land acquisition, scarcity of Class A office space and increased rents for apartments and homes.

According to Community-Wealth.org, a nonprofit information website about CLTs, a typical CLT works as follows: For one to three years, families will pay rent equal to one-third of their incomes, while a CLT like Detroit’s Storehouse of Hope assumes the costs of repairs, property taxes, insurance and water bills.

Storehouse of Hope has said it also helps members interested in repurchasing their homes develop stronger credit in an effort to obtain a mortgage. The tradeoff of the CLT model is when a homeowner decides to resell their property, they must abide by sales caps. By placing limits on the amount of home equity one family can acquire, a CLT keeps its real estate stock affordable.

As the city center and its surrounds continue to rebound and gentrify, Detroit’s neighborhoods are increasingly at risk of becoming detached from the city’s upward trajectory. CLTs offer neighborhoods not on developers’ radars the opportunity to stabilize and thrive.