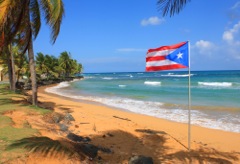 Puerto Rico is in the midst of a legal battle to save its economy through the levers of bankruptcy. Ironically, the same judge who oversaw Detroit’s Chapter 9 restructuring is now advising the Puerto Rican government in that effort.

As noted by the Detroit Free Press, the essence of the island’s debt crisis is strikingly similar to the financial collapse of Detroit, which filed for bankruptcy in 2013 to escape a crushing debt load amid a severely diminished tax base. Of course, the major difference between Puerto Rico and Detroit, aside from the fact that one is a U.S. territory and the other an American city is that, as of now, Puerto Rico can’t legally file for bankruptcy — yet.

However, the groundswell of support for the island’s right to seek bankruptcy protection has increased as investors and politicians continue to struggle with Puerto Rico’s downward spiral into insolvency. The island nation has racked up more than $70 billion in bond debt and at least $50 billion in retiree promises, including pensions and health care, all as its population has declined; politicians just issued more and more debt to pay the bills.

Puerto Rico’s governor, Garcia Padilla has stated that the island’s debts are “unpayable” in full and stressed the need for Congress to change U.S. laws, allowing the commonwealth to enter into Chapter 9 bankruptcy. In an effort to help navigate the political and legal hurdles of an intractable Congress, Padilla hired the former U.S. bankruptcy judge who oversaw Detroit’s case, Steven Rhodes, to advise him on the commonwealth’s pursuit of Chapter 9 bankruptcy. Even as representatives for Puerto Rico’s creditors and the commonwealth continue to negotiate potential settlements, Rhodes has expressed his doubts as to whether anything short of bankruptcy will effectively stop the crisis.

“There are too many creditors,” Rhodes told the Free Press in an interview earlier this month. “Like Detroit, Puerto Rico can’t print money. So Puerto Rico’s insolvency is as much the creditors’ problem as it is the commonwealth’s problem.”

The commonwealth’s creditors, like those of Detroit — pre-bankruptcy — cast a wide net, including small retail investors, large mutual funds and hedge funds. At its peak, Detroit amassed more than 170,000 creditors, according to court filings. Puerto Rico faces smaller, yet as daunting numbers with one creditor, Rochester Fund Municipals, holding nearly $1.4 billion in sovereign debt, according to Thomson Reuters’ Lipper data.

News reports have noted that The White House has essentially nixed any type of financial bailout, but signaled that Congress should consider legislation granting Puerto Rico’s public entities the opportunity to file for municipal bankruptcy.

It’s been more than six months since Detroit emerged from bankruptcy protection, which shaved $7 billion of debt off its books and allowed the city government to free up badly needed cash for municipal services like police and fire protection, as well as blight demolition. The calamitous fiscal and social similarities between Detroit and Puerto Rico are pretty striking: too much debt with too little revenue to pay for debt servicing; a precipitous and sustained population loss; numerous creditors and gaping shortfalls in its pension obligations.

Because there is virtually no appetite in either Congress or The White House for a financial rescue package, bankruptcy is seemingly the only option left for the commonwealth and its 3.6 million inhabitants. Without money to pay its obligations, Puerto Rico’s residents will essentially be living on an island without power, health and safety services, and water. There seems little choice other than for Congress to act as the island’s government creeps closer to insolvency; in municipal bankruptcy law, insolvency is considered a necessary precursor to filing for Chapter 9.