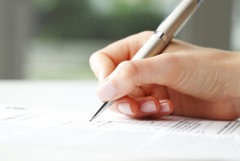 Like much of Western jurisprudence, English common law is the foundation for the American legal system, which includes a 17th Century law known as The Statues of Frauds. Traditionally, the Statute of Frauds requires a written executed document, signed by both parties, the following circumstances:

So, for instance, the transaction of purchasing real estate can’t be executed by an oral agreement. In order to have a binding contract to purchase (or sell) real estate, there must be a written document.

When a potential buyer makes a written offer to purchase a house, the seller has three options:

If a seller makes a counteroffer, the buyer then has the same three options.

Most real estate transactions are smooth and work out successfully. However, once in a while, a major dispute arises between the parties and litigation starts. The first thing a court will want to determine is whether there is a valid contract.

To have a binding, legal contract, three basic elements are required:

However, what consideration exists if no money is put down with the offer? Does this mean there is no binding contract, even if the seller signs the offer? Not really, since consideration can also be something of value. For example, the buyer has stopped looking for another house, in the belief there is a binding real estate contract, and the seller has taken the house off the market, based on that same belief. Thus, there would still be a valid contract, although it is always wise to make a good-faith deposit when you present a purchase offer.

Put everything in writing. If you, as a buyer, want certain items to convey with the house — such as the washing machine, curtains or even the lawn mower — make sure these items are specifically listed in the sales contract. Conversely, if you as a seller want to take certain fixtures with you, put that in writing, too.

Credo: Don’t leave anything to faith — or to verbal promises.