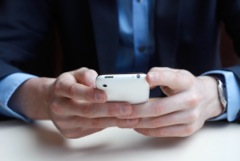 As electronic communication continues to evolve and text messaging augments, or even supplants more “traditional” forms of electronic correspondence, people need to be increasingly on guard that the potential for a simple text message to be interpreted as a binding contract is not so farfetched.

A case from last April, adjudicated in the Massachusetts Land Court, delivered a decision that could help establish a precedent for years to come regarding text messages and what constitutes a binding agreement. Specifically, a text message can constitute a signature sufficient to satisfy the Statute of Frauds and form a binding contract for the purchase and sale of land.

The case, St. John’s Holdings, LLC v Two Electronics, LLC, (available here), basically involved a buyer and seller who, through their brokers, were negotiating the purchase and sale of a commercial building in an industrial park in Danvers, Mass., about 20 miles north of Boston. After some back-and-forth on the terms, the purchaser’s broker emailed the seller’s broker a Letter of Intent (LOI), which was included as an attachment; however, the LOI was unsigned. Subsequently, the seller’s broker communicated by text with the purchaser’s broker requesting a signed LOI by the purchaser, as well as a good faith deposit. Specifically, according to what was written in the court’s decision, the text read:

“Steve [the broker for the purchaser]. [Seller] wants [buyer] to sign first, with a check, and then he will sign. Normally, the seller signs last or second. Not trying to be stupid or contrary, but that is the way it normally works. Can [buyer] sign today and get it to me today? Tim [the broker for the seller].”

The purchaser, St. John’s Holdings, signed the LOI and cut a check, both of which were dropped off with seller’s broker. That same day however, the seller, Two Electronics, accepted and countersigned a third party’s offer for the property; the seller then refused to countersign the original purchaser’s LOI and the buyer filed suit.

The fundamental issue the court focused on was whether the emailed LOI and the subsequent text message, taken together, constituted a writing sufficient to satisfy the Commonwealth’s Statute of Frauds, thus creating a binding contract enforceable against the seller for the sale of land.

In its decision, the court held that, between the LOI, which set out the terms of the deal in sufficient detail, and the text message “signed” by the seller’s broker, there could be an enforceable contract.

As to whether the case settles, goes to trial, or comes to some disposition in between, is anybody’s guess. For the sake of brevity, and without getting bogged in the weeds of detail, the most interesting line of reasoning by the court seemed to be how the court focused on the seller broker’s “signature” at the end of his text message. Sometimes both brokers signed their names at the end of text messages and emails; sometimes they didn’t. When they didn’t, the text messages tended to be briefer and more informal. The court then reasoned that, by adding their names to the end of certain (material) messages and not to other (more informal) messages, “evidenced an intent to be legally bound by the signed text messages.”

It’s important to note that what the seller did, by running two buyers in parallel negotiations, wasn’t illegal; it wasn’t even particularly shocking as a business matter. It began to look a tad sharp, however, when the seller’s broker made it sound like it was a “done deal.”

In any event, the takeaway here is pretty simple: When you’re negotiating a deal, and particularly when using electronic communications, think before hitting send. E-mails, text messages, instant messages, whatever — they all matter.