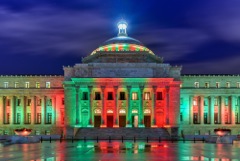 The U.S. Senate overwhelmingly approved a bill to rescue Puerto Rico’s finances only two days before the U.S. territory’s deadline on a $2 billion payment, but the island’s governor, Alejandro Garcia Padilla, declared his government would still not be able to pay bondholders. For Detroiters, this all sounds hauntingly familiar.

The legislation, called the Puerto Rico Oversight, Management and Economic Stability Act, or PROMESA, established a board to oversee the U.S. territory’s finances, including an orderly debt restructuring process and annual budgeting. (Detroit, of course, had its own “oversight board” by way of Gov. Rick Snyder’s appointment of an emergency manager.) The PROMESA bill was sent to President Obama on the afternoon of June 29, which he signed into law that evening, hours before the island defaulted on its latest round of bond payments.

Puerto Rico is, of course, in deep financial trouble. The island is $72 billion in debt and was due to pay a significant portion of it last week. It had already defaulted on previous payments, but the payment due on July 1 included about $780 million of General Obligation bonds, which are both the most important and supposed to be paid off first, according to the Puerto Rican constitution.

The latest General Obligation bond payment was due to creditors before any other of the island government’s bills were to be paid, including necessary salaries to civil servants like police and emergency rescue personnel.

“This administration continues to take historic steps to ensure the residents of Puerto Rico continue to receive essential services while the commonwealth continues to face a delicate financial situation,” a spokesman for Gov. Padilla said last week to a reporter at Reuters.

Puerto Rico’s default on July 1 marks the first time that a state or state-like entity has failed to pay general obligation bonds since the Great Depression. The White House has expressed warnings that unless the U.S. steps in and helps, the island could face a possible humanitarian crisis and complete financial chaos. Since Puerto Rico is not a U.S. state but a territory, it can’t file for bankruptcy, which would allow it to restructure their debt.

The PROMESA legislation, which provides protection from any creditor litigations that could be brought to the Puerto Rican government, has some of the ghosts of “Detroit past” weaved throughout, most notably the “control board” that will supervise restructuring of debts and finances. Both Republicans and Democrats unanimously supported it.

President Obama said of the legislation to NBC News, “This bill is not perfect, but it is a critical first step toward economic recovery and restored hope for millions of Americans who call Puerto Rico home.”

Puerto Rico’s Governor Padilla has mixed feelings about PROMESA and wrote in a commentary on CNBC:

PROMESA is a mixed bag. On the one hand, it provides the tools needed to protect the people of Puerto Rico from disorderly actions taken by the creditors. The immediate stay granted by the bill on all litigation is of the utmost importance in this moment. Most importantly, the authority to adjust our debt stock provides the legal tools to complete a broad restructuring and route Puerto Rico’s revitalization.

On the other hand, PROMESA has its downsides. It creates an oversight board that unnecessarily undercuts the democratic institution of the Commonwealth of Puerto Rico. But facing the upsides and downsides of the bill, it gives Puerto Rico no true choice at this point in time.

The bill should provide some hope for the people of Puerto Rico by allowing the government to allocate scant cash resources to pay for critical needs, including police fire and rescue. As of July 1, the Wall Street Journal reported the Puerto Rican government had less than $400 million on hand to pay bills while thousands have already fled their homes on the island and hospitals can’t treat patients without advance cash payments.