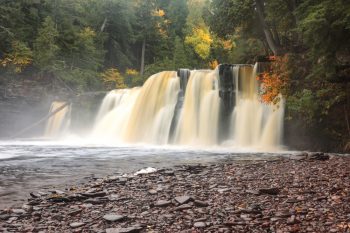 The Michigan Department of Natural Resources recently gave the green light to an exploratory drilling project on the western edge of Porcupine Mountains Wilderness State Park in the Upper Peninsula.

The use permit allows Orvana Resources U.S. Corp., a subsidiary of Highland Copper, to drill in a one square mile area in search of copper. In issuing the permit, the DNR neither provided public notice or a public comment period before issuing the permit on Jan. 31.

According to the DNR, any future mining of the minerals under the park would require Highland Copper to get approval from the Michigan Department of Environmental Quality to amend the existing permit.

According to John Pepin, a DNR spokesman, the company is taking steps to reduce the impact of the exploratory drilling on the land surface of the park.

“Any mining that would be potentially proposed in the future would not be conducted on the surface land at the state park,” DNR spokesman John Pepin said in a statement after the permit was made public.

Pepin said any future mining would be by underground methods from land owned by Highland Copper outside the park.

Back in 1945, the public purchased around 2,700 acres of land, now known as the Porcupine Mountains — Michigan’s largest State Park — but according to Michigan law, it isn’t all owned by the DNR.

That’s because land rights and mineral rights are two different things in Michigan and it could potentially be a huge windfall for Highland Copper or other firms seeking to extract nonfuel minerals from the park.

According to the state’s Department of Environmental Quality, Michigan is the 12th largest producer of nonfuel minerals, including iron ore. The DEQ defines surface rights as use of the land for residential, agricultural, recreational, commercial or other purposes.

Mineral rights owners have the power to access those rights and dig on their property, as long as it doesn’t harm the surface land.

Ideally, the DNR would own both the land and mineral rights in the state park, but back in the 1950s only the land rights in some areas of the Porcupine Mountains were up for sale, according to the DNR.

Currently, the 1-by-1 square mile plot where exploratory copper drilling is taking place is, by Michigan law, Highland Copper’s (the mineral owner) right to drill. However, both the DNR and the DEQ are involved in the drilling process.

Both organizations have worked with Highland Copper to make several provisions in order to minimize impact on the land, according to news reports and statements released by the respective state agencies.

“The drill bits are managed by two workers who drill nearly three meters into the soil each time, and it is only done while the ground is frozen in order to not damage the soil,” the DNR’s Pepin said to WBUP, an ABC affiliate in the Upper Peninsula. “But if we do get that warm weather expected this weekend it will be put to a hault.”

According to a press release from Highland Copper, this specific location was chosen specifically because of previous resource extraction that took place in the 1950s, specifically logging.

The logging created paths that are allowing Highland Copper to use existing inroads instead of having to create an entire network of new routes; the mining company plans to drill 12 holes, as well as create three new routes.

The project aims to be completed by the second week in March, if the company wishes to mine in the Porcupine Mountains, it would need to go through a long process.

First, Highland Copper would have to complete a feasibility study, determining whether the amount and quality of copper is worth the cost of extraction. Next it would need to present its plan to the DEQ, followed by public meetings.

Should the process pass those hurdles, Highland Copper would still need to access the park through tunnels and underground land, starting on the land they own; and provided the mining does not affect the surface of layout of the State Park.